A major debate is looming over the quality and amount of insulation required in the roof, walls, floors and windows of new builds and small buildings.

The country’s building regulator, the Ministry of Business, Innovation, and Employment (MBIE), has released a discussion paper proposing to raise insulation standards and the energy efficiency of new homes and buildings.

MBIE’s document puts up three options but MBIE makes no recommendation on which it favors.

Greenies are delighted and the building industry is wary. Option one is the cheapest and option three the most costly.

The new rules would bump up the cost of building new dwellings by thousands of dollars depending on which option is chosen, with the extra cost greatest in the coldest parts of the country.

It is part of the annual update of the Building Code with the eight-week consultation starting this week and ending on May 28.

“The concern is going to be the laggards in the industry lobbying hard to minimise changes because of the paranoia about building affordability and wanting to do things as cheap as possible,” Superhome Movement spokesman and architectural designer Bob Burnett said.

“I’m sure that MBIE will be lobbied hard by greedy people that just want to make a buck by building shonky homes. This is what’s happened in the past.”

Option one is lifting our insulation standards halfway to the international standards of comparable countries like Australia, England, Ireland, Wales and California in the United States.

Option three would usher in big changes and challenges for the building industry and require new building methods.

Registered Master Builders Association chief executive David Kelly said the organisation would be digging into the background reports to see if the numbers and benefits MBIE talked about stacked up.

The federation had started talking to its builder members to find out what the proposals meant from a practical point of view. There might be other issues that had not been looked at in MBIE’s analysis.

“I think it’s a big conversation, absolutely,” Kelly said. “I think there will be a lot of builders that are very, very interested in it,” he said.

The Green Building Council director of technical standards, Sam Archer, said the council was “absolutely delighted” MBIE was finally looking to improve the energy efficiency provisions in the Building Code.

“It’s been a long time coming.” It was obvious current standards were “miles away” from other countries with climates like ours, and “we need to change”, he said.

The council wanted the best results so would support option three.

“We say that with a little bit of caution, though, because what they’re asking for will require some pretty substantial changes to business as usual construction in New Zealand,” Archer said. He questioned if the industry would be ready.

In colder climates like Queenstown, it would mean triple-glazing and there was not the supply of that at present to support that change. Another example was that builders built with 90mm framing but option three would require 140mm framing and meant changes in building techniques, Archer said.

It was “a bit annoying” that MBIE was not declaring which option it preferred.

MBIE had signaled it would be toughening up the Building Code between now and 2035.

Option three would be a “big shock” to the building industry which had a lot of small building companies who built three or four houses a year and only a few large-scale home construction companies.

Option two would require “tweaks” to what the industry was doing already, Archer said.

MBIE’s documents show option one would be the easiest to implement and does not involve a lot more costs. MBIE estimates for the average 4-bedroom, single storey, timber frame, concrete slab foundation new home the extra cost could be $1800 to $16,000 depending on which climate zone the house was located in.

Option two, raising standards to international standards, is estimated to cost an extra $15,000 to $25,000 for the 4-bedroom home. This option would impact the design and construction in the coldest parts of the country, primarily for windows and walls.

Option three, raising insulation standards above international standards, is estimated to raise construction costs by $19,000 to $50,000 for the 4-bedroom home.

This would require a change in how New Zealand designs and builds homes. It might require triple glazing in the cold regions and thicker walls. MBIE says other methods of construction used overseas would be required for option three.

The primary objective of the proposal is to lift minimum levels of insulation to increase the energy efficiency of housing and small buildings.

Burnett said option one, halfway to international standards, was “a bit ridiculous”.

New Zealand needed to be bold and choose option three, which would require new methods of building. That would be a huge challenge for the building industry.

Most Kiwis lived in homes that did not meet World Health Organisation standards of 18 degrees Celsius inside the home and even new homes built to current standards could have temperatures under 10 degrees Celsius in bedrooms, “which is completely unacceptable”.

Over 95 percent of new homes were built to the code which set minimum standards.

“So we’re building a legacy of shonky homes for the future that aren’t going to protect people and aren’t going to be suitable for our changing climate and dealing to low emissions and low carbon design,” Burnett said.

MBIE is asking for feedback on whether New Zealanders think the Building Code should be updated to require more insulation in new homes and buildings. The proposals also suggest adopting new climate zones to better reflect the New Zealand environment.

The request for feedback is part of the Ministry of Business, Innovation & Employment (MBIE)’s annual consultation on the Building Code.

“In previous consultation processes, we received strong feedback that changes should be made to the Building Code to ensure New Zealand’s homes and buildings are warmer, drier, healthier, and more energy-efficient,” says Building Performance and Engineering Manager Dave Robson.

“We’ve listened, and we want to make changes to the Building Code that work for New Zealanders,” says Dave.

“We are considering options for New Zealanders to bring our insulation requirements in line with other parts of the world.”

Request a FREE consultation for your property…

“We’re also looking into additional climate zones in the Building Code to better reflect the New Zealand environment, so insulation requirements would vary based on where a building is located – for example, Queenstown will no longer be in the same climate zone as Nelson, as clearly the weather these areas experience is very different.”

Other proposed changes include a new verification method to ensure heating, ventilation, and air conditioning (HVAC) systems in commercial buildings are designed and installed to reduce the load on the national grid, and minor changes to weather tightness testing methods for cladding on mid-rise buildings, and geotechnical requirements.

“In addition to the Building Code consultation, we’re also consulting on a new approach to how we ensure the set of standards that are referenced in the Building Code system remain up-to-date and fit-for-purpose.

“These are important changes, so I encourage everyone interested to take the time to read through the proposals and let us know what you think,” Dave says.

A south Auckland tenant has been awarded $30,000 from the tenancy tribunal after his family spent three years living in a sleepout with no insulation or sufficient ventilation.

Sukhmander Singh Brar and his family had rented the property on Takanini School Rd from PFSL Rentals Ltd.

Brar told the Tenancy Tribunal he wanted a full refund of rent because the property he was living in had been “unlawful”.

Tribunal adjudicator Jack Tam agreed the property was unlawful because it had only been consented as a “games room” or additional sleepout.

It also opened out directly to a hazardous in-ground swimming pool which was not maintained and derelict.

View our range of insulation products…

Auckland Council confirmed that due to thoroughfare issues, the pool was unsafe and failed mandatory swimming pool fencing inspections.

Council inspectors noted the pool area was used to access the sleepout by tenants and was the only way to get into the unit.

There was also insufficient ventilation to the unit which became more apparent when Brar’s wife was cooking inside the unit.

Brar said there were only two windows inside the living room area and both would have to be opened every time someone was cooking.

“Due to the landlord’s failure to comply with requirements in respect of buildings, health, and safety, and the nature of the dwelling, it is clear to me that the unit should not have been let out to anyone,” Tam said. 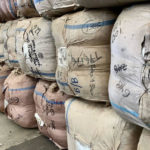 Sheep farmers and wool brokers have donated about 300 bales of wool to the #Bales4Blair fundraiser. The wool will be made into insulation and carpet for the Southland Charity Hospital, currently underway in Invercargill.
The fundraiser is named after the late #Blair along with his and his wife Melissa campaigning for better care for cancer patients.
The wool is to be blended, scoured, and sent off to the insulation and carpet manufacturers including Terra Lana Products Ltd. NZ Woolscouring Ltd is providing its services at no cost.
Green Dog Insulation loves to see it!

Covid-19 has caused New Zealand’s average residential power use to rise in 2020 – but the average bill is the lowest it’s been in a decade.

Data released by the Ministry of Business, Innovation, and Employment showed the national average residential power bill was down by $126 a year compared to five years ago.

The average household bill in New Zealand was found to be $2113 a year, one of the lowest annual bills in the developed world.

The Electricity Retailers’ Association said some customers still had high power bills in winter because of the poorer quality of their housing, which required higher use.

But on average, power use had been falling over time as improvements were made to such things as insulation.

“We’ve got a heck of a lot of competition in the New Zealand energy market, a lot of power companies all competing for customers and we’ve got a lot of customers looking to get the best deal,” he said.

“About half of all households compared power plans this year and that’s a great way of making sure you’re getting a deal for you and staying on top of prices.”

However, Burrows said power use had increased by about 2 percent overall this year, as a result of more New Zealanders staying home during the pandemic.

Coronavirus is not our most pressing public health problem